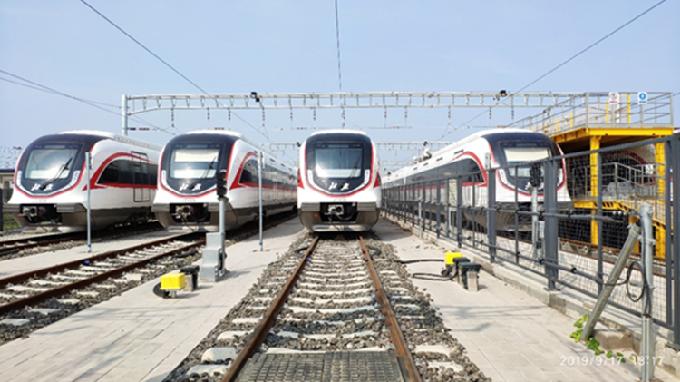 Beijing Daxing International Airport Express, also called the second airport line of Beijing, started from Caoqiao Station in the north, passing by Daxing Xincheng Station and ended in Daxing Airport Station in the south, with the full length of 41km and the total operation time of 19min. The line is equipped with the full-automatic operation system (FAO, or “driverless operation”) independently developed by Traffic Control Technology Co., Ltd. (hereinafter referred to as TCT).

Under the support of NDRC, FAO and “Fuxing” bullet train has become the highlight of China's major equipment as well as a new competitive advantage and driving force for the development of manufacturing industry in China. (Three-Year (2018-2020) Action Plan for Enhancing Core Competitiveness of Manufacturing Industry of NDRC) The core of full-automatic operation system (FAO, also called driverless operation) is the signalling system which is an independent intellectual property of TCT and was applied to Beijing Subway Yanfang Line in 2017. The system applied to Daxing Airport Express is the upgrading version “interoperable full-automatic operation system, the operating speed of vehicle is up to 160km/h, which is doubled compared with that of traditional metro. Daxing Airport Express is constructed based on the standard of interoperable full-automatic operation system, so that two different signalling systems can operate on the same line, which is favorable for sharing resources, relieving the transfer pressure and improving the carrying capacity and operation service level.

Besides, Daxing Airport Express is a city railway in the metro commuting mode, which initiates the adoption of FAO system at high speed and realizes fully integration of metro and city railway. Compared with the traditional idea and mode of high-speed operation in railway, Daxing Airport Express breaks through the bottleneck of technology completely, and the operating speed is up to 160km/h. Furthermore, the line operates in the commuting mode so as to save a lot of time for passengers, provide great convenience and truly realize regional commuting. The operation of Daxing Airport Express lays a solid foundation for the integration of four networks such as city area, metro, high-speed rail and inter-city in the future, as well as promotes the regional economic development greatly.

As the FAO system provider of Daxing Airport Express and the first high-tech enterprise that masters the core technology of CBTC (communication-based train control system), TCT has always been committed to continuous expansion on the basis of core technology of CBTC, and has successfully conquered and mastered the rail transit signalling technologies such as I-CBTC and FAO. Interoperable FAO is a system further upgraded based on I-CBTC and FAO. TCT applies the interoperable FAO system technology to engineering project for the first time, realizing the transformation from “following” to “leading” compared with the same field in the world.

In order to realize comprehensive train monitoring and provide high-quality passenger service, Daxing Airport Express not only improves the linkage treatment level emergency situations such as long interval based on Yanfang Line, but also increases the functions of AI-based autonomous perception (TIDS) and enhances the quick recovery capacity of system in failure scenario, so as to fully monitor the rail transit signals, power supply, electromechanical system, vehicles, platform door and passenger service and realize quick system linkage and emergency treatment in abnormal cases. In addition, the integrated linkage of major systems is strengthened, which improves the automation level further.

In the future, TCT will seize the good opportunity for the rapid development of rail transit industry in China, continue to give full play to the advantages such as strong innovation ability, rich engineering experience, familiar with domestic operation demand and capable of providing customized services, and make continuous contributions to build China into a country with strong transportation network in the world.