In this context, Traffic Control Technology Co., Ltd. (“TCT”) was invited to attend the 2020 Smart Urban Rail Shanghai Forum hosted by CAMET. At this forum, Liu Chao, vice president of TCT, interpreted the next-generation smart urban rail transit system on behalf of TCT, and conducted in-depth discussions over this topic with the participating guests. 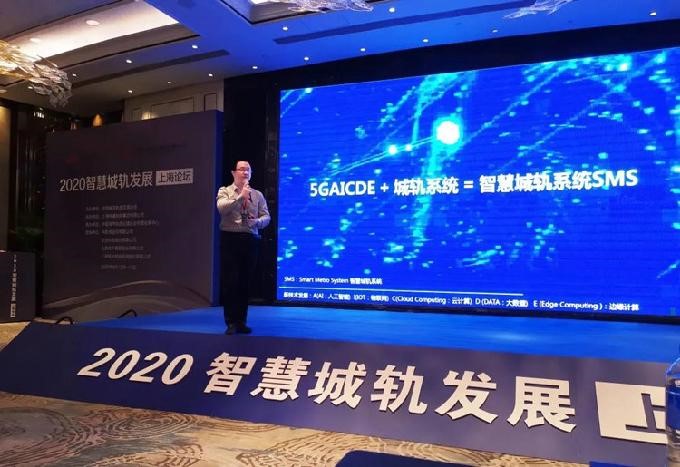 With the iterative evolution of emerging technologies such as AI and IoT, the in-depth integration of urban rail transit and these technologies should be accelerated. TCT hopes to build a Smart Metro System (SMS) through a combination of urban rail transit and 5GAICDE (5G communication, AI, IoT, Cloud Computing, DATA and Edge Computing) to realize the interconnection of people, machines and things, empower related parties, and drive the development of the entire urban rail transit industry towards digitalization, networking, automation and intelligence.

Currently, urban rail transit is developing like a network, forming a huge, complex system with over hundred million nodes of collection. Intensification represents an important direction for the development of smart urban rail. Based on the extended development of the cloud platform, the Tianshu Smart Urban Rail Platform developed by TCT combines the technologies of industrial internet and mobile internet and represents a smart hub featuring unified collection, processing and transmission. Through a unified bus and the extensive interconnection of cross-specialty data, the Tianshu Platform will get rid of the previous information islands and the repeated task of establishing separate data channels among business systems. Through open, flexible resources allocation and pooling management, the platform will integrate various innovative applications in the form of apps to realize the modeled, reused and software defined technology and to form a final urban rail transit industry ecosystem featuring resources enrichment, multi-party participation, win-win cooperation and coordinated evolution.

Based on extensive data collection and sharing, an “urban rail brain” will be built in the SMS system of TCT to integrate massive data and learn historical data and real-time status. In combination with the professional knowledge of the rail transit industry and through the joint effects of status big data and deduction model, the brain realizes the optimal planning and decision-making that feature the optimal balance of goals, enables the transformation from “fixed, planned deployment” to “precise, on-demand and dynamic deployment” and from “preventative maintenance” to “predictive maintenance” so as to achieve the goal of more efficient and flexible use and control of urban rail transit resources.

For smart trains, TCT believes that they should be made to perceive things, make and execute decisions and learn by reference to the method of AI. V2X (vehicle-vehicle, vehicle-ground, vehicle-rail) should be used for vehicle-vehicle, vehicle-ground and vehicle-cloud perception, control and safe collaboration and making trains transit from single-agents to the multi-agents in which the fleet, the track and vehicle cloud collaborate with each other. Through real-time information sharing and multi-agent collaboration, the multi-agent smart train has the ability to dynamically change its own composition, realize the dynamic operation of non-contact formation, and respond to the various travel needs of passengers.

Reaching passengers in their travel

In the future, the smart urban rail system will be able to make self-adjustments and dynamic decisions based on the needs of passengers through the Internet social network. A passenger will be able to independently select the departure place, route, time and mode of rail transit travel, seamlessly and intuitively select the destination, travel mode and diversified activities and services on the way. The train will also be transformed into a smart space integrating “travel, entertainment, work, and social interaction”, thus meet varying needs of passengers during the journey.

The AI revolution has made the public realize that the IoT intelligent technology can bring disruptive changes and also provide a valuable opportunity for the comprehensive digitalization and intelligence of China’s urban rail transit construction. TCT wishes to work with industry peers to focus on intelligence and also autonomous construction of smart urban transit proposed in the Outline for the Development of Smart Urban Rail Transit in China. Under the guidance of CAMET and owners, TCT will spend 15 years in establishing a grand blueprint for urban rail transit in China together with its peers.