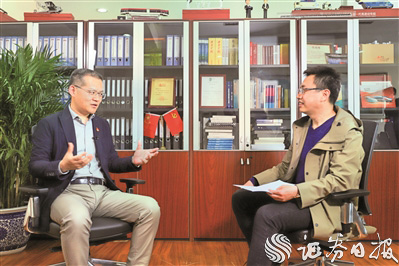 Gao Chunhai, the CPC branch secretary and president of TCT (left) accepts the interview of the journalist of our newspaper (photographed by Wang Yihui)

Behind a successful enterprise, there might be a kind of mighty belief. As for Traffic Control Technology Shares Co., Ltd (“TCT”), it is undoubtedly a kind of proud to make breakthrough in critical restrictive technologies and even lead in the world. While the formation of this belief is bound to be closely related to the inheritance of the spirits in TCT, i.e, the spirits of exploration, construction and reform of China Communist Party during its history of a hundred years.

The year 2021 is the 100th anniversary of the foundation of CPC, and it is also the first year of the Fourteenth Five-year Plan. Gao Chunhai, the CPC branch secretary and president of TCT, was filled with all sorts of feelings at this special time point. During a hundred years, the critical technology of signal system of urban rail transit in China was once restricted by foreign monopoly, in words of Gao Chunhai, it means “enduring rough conditions set by the foreigners with high expenses”, “having no right of speech at all”. There is no shortcut to follow when “a large country of traffic” is transformed to “a powerful country of traffic”, and this transformation can only be realized with firm belief and continual innovation.

Since the 1990s, a lot of CPC members in TCT, represented by Gao Chuhai, came out boldly and did hard work to realize the development level of developed countries of 60 years in only 30 years, and they have successfully researched and developed the rail transit signal system with independent intellectual property.

Recently Gao Chunhai illustrated a grand image to the journalist of Securities Daily in the president office of TCT, in which the ambitious young people devote themselves to the construction of New Era and the realization of China Dream.

Being responsible and having no fear of sacrifice

“The initial mission of TCT is to resolve the critical restrictive problems” Gao Chunhai told the journalist of Security Daily.

During the practices of more than 100 years, CBTC, the core technology of signal system of urban rail transit, has been controlled by some foreign manufacturers, such as Siemens, Alston and Thales, etc. It would cost China for billions Yuan to import CBTC signal system at the beginning of 21st century.

In 1993, Gao Chunhai graduated from Northern China Communication University (the current “Beijing Jiaotong University”) at 23 years old and became a teacher there. When Gao Chunhai was teaching in university, he had witnessed the rapid development of rail transit in China as well as the rapid increment of the demand of imported CBTC system, he also recognized the high import and maintenance cost of international CBTC system.

Gao Chunhai still feels angry when talking about the situation at that time, “our technology became mature gradually and the cost of domestic engineering was lower and lower, however, the cost of imported equipment was incredibly high. The price of the components for later operation and maintenance might even be 10 or 20 times of the original price, and we had no rights of speech and price negotiation as Party A.”

Gao Chunhai met an opportunity in 2008. He lead a team to complete the research and manufacture of the sample machine of proprietary CBTC system in that year. TCT was formally founded in the next year, and Gao Chunhai lead the company to undertaken Beijing Subway Yizhuang Line - the demonstrative engineering of the first CBTC system with the proprietary intellectual property in China.

It is absolutely not easy for career establishment. Gao Chunhai once faced the pressure of paying the staffs salary without orders on hand for consecutive two years after TCT is founded, and he was also questioned by the persons around him. “However, we finally developed firmly, for we have fine genes of CPC member, the original mission of realizing independent and controllable innovation, as well as the mission of mastering the core technology.” Gao Chunhai said.

“There are bound to be someone to sacrifice himself”. “We must pay more to reach this destination, and it might takes one or two generations of people to catch up with and surpass the advanced level.” Gao Chunhai said to the journalist frankly that, he seldom reunited with his family members in the recent tens years. “Because the gap is very large indeed, and the competition is also very cruel, and if we also work 8 hours a day as them, the gap can only be larger and larger.” I told my child, your dad works 16 hours a day, just in order to make the people of next generation can stand in the same starting when they are competing with the international rivals.

“Our daily work is very ordinary”. Wang Wei said, “each CPC member as cadre will remember his original intention and mission no matter which working post he is at and at any time, and this is very uncommon; they always bound ahead at all time, and they are worthy of being respected and admired by all”.

The golden years without fear of hard work

What is behind the fearlessness of sacrifice are the inheritance of belief and hard work.

Gao Chunhai told a moving story to the journalist of Security Daily, Beijing once met the cold wave in January, 2021. In the evening peak on January 6 and early peak on January 7, there occurred 3 signal failures in Changping Line and Yizhuang Line of Beijing Subway, and they caused the temporary stop and late of train, and a lot of staffs were stuck in the subway trains. In order to recover the normal operation of the urban rail transit of Beijing, the upper and lower reaches of the rail transit industry in Beijing launched the counteracting plans actively. In order to replace the equipment without affecting the normal operation of urban rail transit, 10 repair teams worked overnight on January 7, and TCT also participated in this action.

What the rescue teams were facing was not only the cold weather, but also the situation that a lot of equipment couldn’t be transported to Beijing under pandemic situation. When the equipment couldn’t be transported to Beijing, they had to be moved manually”. The staffs of TCT went on the highway along with operation company, and they mobilized the equipment out of the highway with their hands and shoulders.” Gao Chunhai seemed to sob, however, he said with firm eyesight, “the urban rail transit of Beijing recovered its normal operation since the first train on January 8 under their effort.”

“90% of the staffs advancing ahead are CPC members”. Such stories are actually very common in TCT, especially during tackling technological problems.” Xi Jiayi, a young CPC member, told the journalist of Security Daily that, “it was just in the last month when Secretary Gao lead us - several young men no more than 30 years old - to tackle the problems without resting for three days. The leading effect of the CPC members as cadres can be sufficiently presented under such tedious situation.”

When talking about the new emerging forces, Gao Chunhai is fulfilled with all sorts of feelings, “the collectivism idea as well as the spirit of overcoming difficulties of these young people are very obvious.” They have a strong sense of identity to their industry, and if this work is significant indeed, and it can bring an active effect to the society, country and nationality, they will feel that their youth is not wasted. One of my largest wish is to cultivate more young people.

It is introduced that the average age of scientific and technological staffs of TCT is 29. In the view of Gao Chunhai, the average age of the persons in an industry determine the vitality of this industry. He told the journalist that rail transit is not regarded as a hi-tech industry by many people, and some people even think that the person working in railway industry are simple and rough fellows.” “Therefore, I am engaging in developing this industry into a place where young people are willing to come these years, I will give young people more chances and I hope they can be more excellent than me. I make them bring out large effect in overcoming the difficulties in the industry, and I also guide them to learn the history of CPC actively and guide the excellent staffs to join CPC.”

The vision is realized under the guiding of CPC organization construction

This year is the first year of the Fourteenth Five-year and TCT also starts on a new starting point. Gao Chunhai said, TCT will update and extract the CPC construction culture of the enterprise on the original basis, and it will strike to realize the vision of “becoming the world-level leader of technology and creating the beautiful life of travel”.

Currently, part of technology of urban rail transit technology in China has been abreast with the advanced technology in international market, however, Gao Chunhai is still not satisfied with it. He renders that, in order to transform from a large country of traffic to a powerful country of traffic, China must develop in the direction of surpassing powerful country, and it must be ahead of other countries in a certain field for one or two generations.

Gao Chunhai said frankly that, there is still much work to do to promote the current signal system of urban rail transit. TCT raised in 2020 annual report that, utilizing the current technical measures of control system of rail transit can only improve the troublesome situation by padding and its effect is limited. We are urgently demanding a set of system technology with brand new infrastructure to solve the problems in network development of urban rail transit nowadays. As for TCT, the critical time point to bring out the advantages and realize the technical leading might be the current time.

Gao Chunhai told the journalist that, the reason for the breakthrough from “0” to “1” for the signal system of urban rail transit in China within 30 years, on one hand, comes from mighty belief and fighting spirit, and on the other hand, comes from our attention paid to infrastructure construction, what is more, the market of rail transit in China is still in the phase of benefiting from development.

“The rail transit will still keep rapid development in the future 10-15 years, and it will become the best opportunity for us to perform technical upgrading and apply innovation.” Gao Chunhai told the journalist, TCT will utilize the policy advantage on new infrastructure construction to promote the technical level of signal system of urban rail transit in China.

“Now I am working on the sixth generation (of signal system), and I also plan to work on the seventh and eighth generation, and I will at least realize the breakthrough of three generations in the next 10 years.” Gao Chunhai is very confident about this.

“The people of my generation, born in the 1970s, really grew up in New China and didn’t suffer from starvation; we have a chance to learn in university and have undergone the reform and opening of China as well as rapid economic development. Gao Chunhai expressed his feeling that, “in the 100th anniversary of the foundation of CPC, I am sorting out the struggle history of CPC and guiding the young people to recognize the struggle in the hundred year. “Our enterprise can have a healthy development just because of a prosperous and strong country, as well as many excellent CPC members working with us.”

A beam of sunlight lit on the face of the entrepreneur after transmitting the glass. Gao Chunhai stood up and walk to the window, glaring afar and saying affectionately, “even if there was no TCT, China is bound to have its own signal system of urban rail transit. However, if there was no CPC, China still underwent the situation of being passive and restricted.”